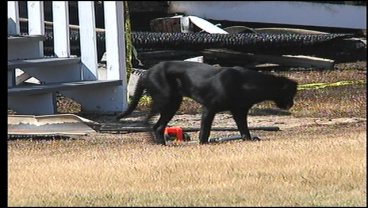 BRYAN COUNTY--The fire that consumed a national landmark has many people wondering how it happened. A group of volunteers is determined to rebuild Fort Washita to what it once was.

The Oklahoma Fire Marshal doesn't think Sunday's fire was an accident. The case has been ruled an arson. The Bryan County Sheriff's office is investigating who might be involved. Though the fort is a sea of rubble, some volunteers want to see it standing again.

Since Sunday's fire, Fort Washita has been a taped up crime scene. Volunteer Vicki Mills remembers the times she put on a costume for historical reenactments at the fort.

"When you come out here, they don't even recognize who you are because you've got your whole outfit on and a wig sometimes and so your hair is a completely different color," Vicki Mills said, volunteer.

That's the least of her worries now. Seeing her memories in a pile of burnt wood compels her and her fellow volunteers to do something about it.

"It was devastating to all of us to know that a major part of the fort had burned down--especially since it was such a needless loss," Mills said.

The Oklahoma Fire Marshal has ruled the incident arson--and thinks it was intentionally set. Bryan County Sheriff Bill Sturch says that three individuals have been questioned so far--a forth is being talked to. Names have not been released, but the suspects aren't minors. The investigation is still ongoing.

"I would like to see us be able to rebuild the barracks because I think it's the heartbeat of the entire fort," Mills said.

Mills and other volunteers want Fort Washita back. They're raising money for it. By Saturday, they'll know if the state will give them permission to repair the site.

Until then, they're just waiting to see if they can preserve history.

Tax deductible donations can be made to Fort Washita by contacting the Oklahoma Historical Society or Fort Washita in Durant.

Credit Card donations can be made by calling the Oklahoma Historical Society and referring to the "Rebuild Fund for the Barracks" at 1-800-750-4090.

Checks can written out to "Attn: Fort Washita" and mailed to: