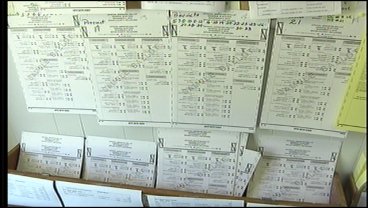 BRYAN CO., OK -- When Oklahoma voters head to the polls in November, they better allow for some extra time.  That's because there are so many races and state questions to vote on.  Some elections officials say it's the longest ballot in Oklahoma in the last quarter century.

So, what's on the ballot this November in Oklahoma?  The better question is; what isn't?  "This is the first time that I've had one where I've had to do two, three column ballots."  Bryan County Election Board Secretary Linda Fahrendorf should know.  This isn't her first rodeo.  There are so many things on this year's ballot, it's meant a lot of work for her office.
Fahrendorf said, "Double, double everything because you have to have double your ballots."
Double the ballots, at least in Bryan County, because there are so many races and state questions.  That, combined with the special question being voted on in Bryan County and they had to create a second ballot.  Fahrendorf added, "We were just crossing our fingers hoping that it wouldn't happen.  But they were full on theirs and we couldn't get ours on it."  There are races for Governor, Lieutenant Governor, Attorney General and State Superintendent.  Then there's a US Senate race,  State and US Rep races, judicial races, State Senators and even county positions.  Confused yet?  Fahrendorf hopes voting on November 2nd doesn't end up being too much for some to handle.  "Whatever we can think of that might possibly help with a smooth election we've done."  Remember, the general election is November 2nd.  You have until October 8th to get registered to vote.

For more ballot information in Oklahoma and/or Texas: