Storm Shelter Closes After Thousands of Dollars in Damages 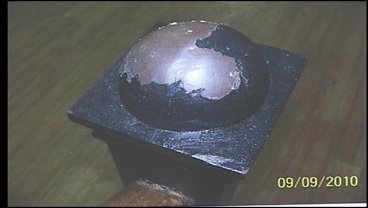 LOVE COUNTY, OK-- In Marietta, a severe weather shelter has been closed because officials say those taking shelter, trashed it. Meredith Saldana has more on this story.

County officials say this is the second time this year that they've found the shelter trashed following a night of storms.

Pushing them to make the decision to close the shelter to the public.

Emergency Management Director Tracey Smithwick says, "It hadn't really been to much a problem until recently, it's just been tore up."

Just months after Love County commissioners had the basement storm shelter at the courthouse renovated, residents seeking shelter from a storm left trash all over the shelter floor and peeled paint off of the stair rails and walls.

"It was a real hard decision for the commissioners and everything to do it but they decided, well you know, we can't keep spending money and it get tore up like this and respend money," says Smithwick. "So they went ahead and officially closed it."

Smithwick says there is still another option for residents,  the shelter at the Senior Nutrition Center on Highway 77,  will still be used as a public shelter during severe weather.

It can fit more than 200 people looking to take cover.

However, some residents say it's not an option.

"I live here in town, but I don't think I could get there with no vehicle. It's closer to walk there," says Lacasie Lyle.

Resident Kristy Lowery adds, "It's easier just to walk to the courthouse living here in town, instead of having to find a ride out somewhere else. It's not right."

While others say they understand the commissioners decision.

"Well I think it's a sad day that they do have to close something that helps protect our people that do not have shelters when storms hit," says business owner John Yeatts.

Rick Lewis adds, "I promise you that for them to have to shut that down because people won't take care of something and have some pride in the community it's a disgrace, it really is. Well I feel bad for the people that don't have a place to go but they needed to respect the premises when people were on there they go in there and tear up the joint, they can't expect for them to be happy for them to come back."

The county is hoping that fema will approve a grant to help home owners pay 75% of the bill for a home shelter.