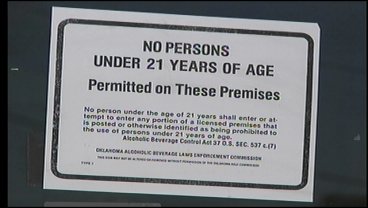 DURANT, OK -- A sting operation in Durant reveals it's a lot easier for minors to buy alcohol that it should be. Police say nine out of the city's 21 stores that sell alcohol were caught selling to people under 21 years of age. Deeda Payton reports.

There are 17 convenience stores and four liquor stores in Durant that sell alcohol, according to Durant Police. Over the weekend, nine of those were caught selling alcohol to minors. "It's very shocking and our goal is to reduce that," said Captain Joe Clark of the Durant Police Department.

Capt. Clark says the busts were made during a sting operation where students between the ages of 16 and 20 were sent into the stores to try and buy beer or liquor. "What happens is they'll walk in, pick up a 12 pack of beer, take it to the counter and a lot times the clerk asked for the id," said Capt. Clark.

Corner Liquor was one of the nine stores that was cited for serving to minors. "That's kinda sad. I don't like to be part of that group," said Owner, Jake Jaques.

Jaques says they card everyone that walks into their store. "Our rule is we would card our mom. You know we carded that person and it was just a fake id so it bugs us you know."

Capt. Clark, though, says no fake id's were used in their sting. "A lot of them are surprised. Many of the clerks have looked at the id's and for some reason they went ahead and sold anyway some gave me excuses that they read the date of birth wrong."

"It irritates me that they can go in and do that it's not supposed to happen," said Durant Resident, Tracy Herron. Residents were shocked to learn how easy it was for those teenagers to buy alcohol and hope these sting operations cut down on underage drinking, but police admit it's an ongoing battle.