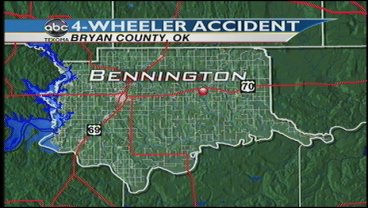 BENNINGTON, OK--- A four-wheeler accident occurred around 6 p.m. Sunday evening in Bryan County.
17-year old Jennifer Knox from Bokchito was driving her car on a county road in Bennington, when a four-wheeler in front of her tried to turn and she hit him.
The driver of the four-wheeler, 16-year old Austin Dennis, suffered serious injuries and was lifted by Air-Evac to Parkland Hospital in Dallas.
As of Sunday evening, Austin was listed in stable condition. However, he was not wearing a helmet as was driving illegally on the road.