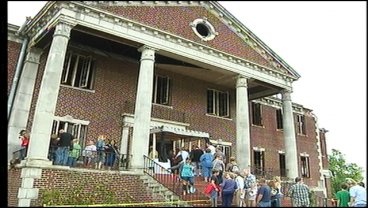 SHERMAN, TX--A giant building in Sherman that looks like it's falling apart was actually open to the public Saturday. People have finally got to see inside a historical building that many have been mistaken for being haunted.

As a child, Jaron Mathenia lived in an apartment complex next to an enormous, deteriorating historical building. His uncle, he said, would tell him ghost stories about what was inside.

"There were dungeons and there use to be people who get killed all the time--everything," Jaron Mathenia said, Red River Museum Volunteer. "It use to be crazy, and then you hear the stories on what the real history was and it amazes you that why is the place still being left like this."

Despite rumors and tall tales, the building isn't haunted, and there's not dungeons in the basement. In fact, there's a rich history behind these walls.

"There's so much history here, and I know most people have passed the building and see it deteriorate and wonder what this building was, now they're going to know the full story," Barbara Morrison said, former Woodmen Circle Home resident.

Barbara Morrison's father was a caretaker of the building in the 1950s. She lived with her family at Woodmen Circle, which was a retirement home for women who forfeited the Woodmen life insurance, and an orphanage for children.

James Vester came here when he was 12.

"Mother was not able to take care of me--she had medical problems," James Vester said, Woodmen Circle Home orphan. "My father had left us, and I was living with my grandmother.

Vesters' grandmother decided she couldn't take care of him and made a sacrifice.

"If she would give up her opportunity to live here would they take me? And they did. Thank heavens," Vester said.

The building was a warm home for many until the 1970s when it closed down due to a lack of business and new building code requirements. The historical structure now sits in disrepair, but the memories live on.

"It just was such a happy place in my memories--during that period of time," Morrison said.

The mystery has been revealed for younger generations, but it doesn't keep their imaginations from wondering what was once in inside.

More than 600 tickets were sold for the event. All proceeds benefit the Red River Historical Museum.