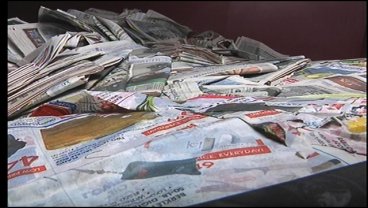 DURANT, OK--In an effort to clean its streets, Durant went green this weekend.

The city of Durant is asking its citizens and volunteers to pick up trash and recycle.

Durant does an annual recycling event every spring in conjunction with the State of Oklahoma.

Volunteers do an annual roadside trash pick-up every fall, but this is the first autumn that they're recycling too.

"Try to just get the community involved--just try to get the word out," Larry Mitchell said, Durant Solid Waste Superintendent. "It's an eyesore and we try to pick up as much as we can but for the most of the year, a lot of it lays there on the ground--on the roadside."

Newspapers, cans, magazines and plastics were being accepted at the Market Square until noon Saturday.