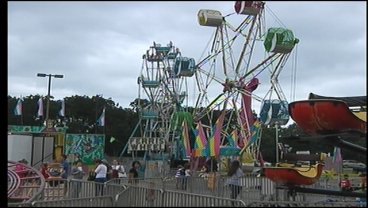 POTTSBORO, TX--An annual festival in one Texoma town is brining dollars to its economy.

Despite the rain, Pottsboro kicked off Frontier Days Saturday morning at 9:00, starting with a parade.

An estimated 3,000 locals showed up at Friendship Park to visit countless vendors and go on carnival rides.

The tradition has lasted for several years, and originated as a tribute to the Shawnee Trail that started at the Red River and ended in Dallas.

"You know it's great for the city. It brings local people out to be together as a big family," Brett Arterburn said, Frontier Days Chairman and Pottsboro Police Chief. "It also brings in--you know--some tax dollars from surrounding cities. Every dollar they spend inside the city always helps the revenue of the city."

Last year, approximately 100 vendors participated in the event. There were also bands and live entertainment.