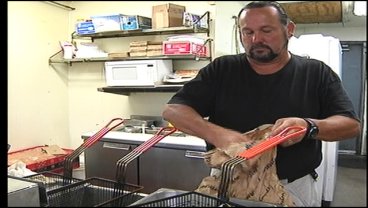 SHERMAN, TX--Just hours after police say Pamela Thomas abandoned her baby in a dumpster, restaurant employees say they started getting threatening phone calls and that someone threw a brick through a window.

After one of his employees spent several minutes in the bathroom, then left to throw something away, restaurant owner Eddie McEwen said he went to check it out.

"After I found it and heard it crying, I jumped back up and called 911 and told them to get here as quick as possible because this baby's only 3 to 5 minutes old," Eddie McEwen said.

The owner of Eddie Mac's said a customer helped him get the infant out of the dumpster--its umbilical cord still attached.

By Thursday evening, restaurant workers say they started receiving threats. The owner alleges that someone even yelled "baby momma's killer" while driving by.

"Calling up and hanging up, 'you're going to get yours' --you know-- 'your time will come,' stuff like that," McEwen said. "They didn't talk long enough to stay on the phone very long."

After the threatening phone calls, the restaurant owner says that a suspect threw a brick through his back window breaking it and costing nearly $50 in damage.

"People driving by hollering obscene things," McEwen said. "No one knew who it was--just a pick up and then they called me back and said, 'Well he came by and threw a brick through the back window."

If a suspect is found, he or she will be charged with criminal mischief.

"We don't know if it's related to the incident with the newborn, and if the suspect did throw that because of it, the newborn has no relationship and is not tied to Eddie Mac's in any way other than that the incident that occurred there," Sherman Police Sgt. Bruce Dawsey said.

McEwen suspects that the incident could be related to the baby being abandoned earlier that day. He just doesn't know who did it.

"I've got children and grandchildren and I couldn't believe somebody would just take a baby that's alive and drop it in the dumpster," McEwen said.

Though he has to board up his window until it gets fixed, McEwen said he's glad he helped save the baby's life.

No suspects are in custody. It is still uncertain why the threats were made or who they were directed to.