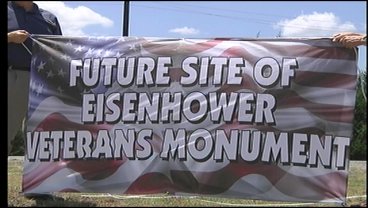 DENISON, TX -- The new Eisenhower Memorial will soon go up in Denison. The Denison Veterans of Foreign Wars Post 2773 presented a check Thursday for about a $1,850 to the memorial organizer, Doug Coleman.

Memorial Organizer Doug Coleman says it will be a landmark for Grayson County, for Denison and hopefully it'll help direct traffic downtown to the birthplace and help our economy by bringing a few more people to the area. Coleman says they are still hoping to unveil the new memorial on Ike's birthday which is October 14th.