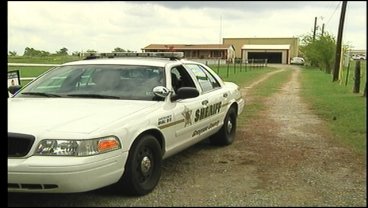 GRAYSON COUNTY, TX --  More now on a developing story, a homicide-arson investigation in Grayson County. Wednesday, we told you one of the three victims was pregnant. Now as Deeda Payton reports, authorities are looking at whether that could mean a fourth murder charge.

Three people lost their lives inside this burning mobile home, all three were shot, two were shot and stabbed and one was pregnant.

Now Grayson County's justice system is working around the clock on what they consider to be one of the most horrific crimes ever committed in the area. "Anytime there's multiple deaths and with the viciousness of this crime we're going to be looking real seriously at the death penalty. There's lost of factors that go into that for a prosecutor," said District Attorney, Joe Brown.

Brown says whoever did this could be facing capitol murder, but not just for killing three people and a fetus. "You can charge capitol murder in Texas when somebody kills more than one person in the same episode or often they will kill someone in the course of committing another felony like the arson in this case."

Brown admits his office is a long way away from prosecuting this case. "We gota catch this person first and so we won't even be getting to that question, but whoever did this is facing serious legal problems and you can bet we'll be coming aggressively after them."