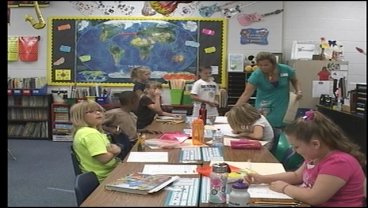 ARDMORE,OK--It's no secret that schools have been handed several budget cuts over the last year.

Here's a neat story of a Texoma business that helped a local school raise a hefty chunk of change.

The program is called Drive for Kids and Chrysler started the program in 1993.

"Yes, time's a little tougher and I know teachers are having to buy some of the supplies so whenever we give back to the school it's awesome," Atencio said.

Here's how it works: during open house Carter County Dodge brought Chrysler cars over to Plainview.

Parents were asked to test drive the cars to help raise money for the school.

"Once they realized that we weren't trying to sell them a car it was very easy," said Mindy Bailey, Parents in Action President.

For every car that a parent took for a quick spin, the school received $10. It may not sound like much but it quickly added up.

"I was pleasantly surprised. We were hoping for maybe, possibly, $500. We almost doubled our expectations. We were just overjoyed with the outcome." said Bailey.

"So, as you can see, this year $970 given back to the school. That means there were 97 test drivers, took less than 2 hours and, guess what, the school benefited by almost $1,000. So it's really simple and it's a fun process for everybody," said Atencio.

And Plainview is a school that holds a special place in Rocky's heart.

"Well, you know, when your kids go to school here and, you know, you see a lot of these kids, you know, it's always nice to try to give back to the, to the kids you know and the people you know." he said.

Wednesday, Rocky delivered the check to the Plainview Primary School--something he's done the last few years. This year, however, in the tough economy it's worth even more.

"Oh the teachers are always very excited cause there's so many needs that come every year and of course with the financial times as they are this money will come in very handy for them," said Principal Lisa Moore.

Moore says ultimately the children benefit from the donation and they're very excited about that.