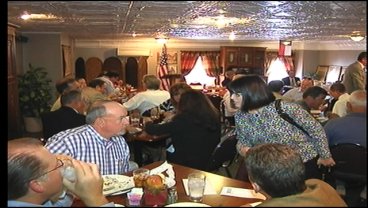 SHERMAN, TX --  The candidates who are vying for the top job in Grayson County went face-to-face Wednesday.

Republican incumbent County Judge Drue Bynum and his Democratic opponent, Greg Middents held their first debate in front of members of the Grayson County Bar Association.  Both said they plan aggressive campaigns until election day in November.  "If you've seen the signs outside, um, going door to door, that's one of the things that I really enjoy.  Obviously I can't block-walk the whole county, but I'm going to block-walk as much as I can," said Middents.  Bynum said, "I don't vote on an issue to get re-elected.  I vote my heart, and I vote what the people want, and I think that resonates with the voters.  We're going to continue to go after that, go after it hard, uh, we'll shake a lot of hands, and just be out and about amongst the people."  There will be three more debates including Thursday in Van Alstyne, Monday in Denison and then October 14th at the Grayson County Courthouse.