Father Loses Both Daughters in Arson 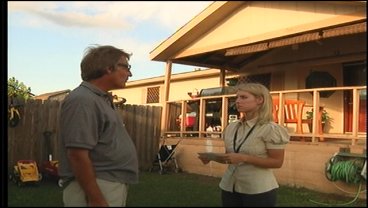 SHERMAN, TX -- Tuesday, the names of the victims were released. 30-year-old Brian Ritchie lived in the home along with 25-year-old Misty Ballou. The third victim was Ballou's older sister, 28-year-old Cassandra. The sisters were identified by their father, Larry Ballou, who spoke to Deeda Payton about his loss.

Larry Ballou is a father of two. Monday he started his day just like any other day, went to work, ate lunch, then he got a phone call and that's when he says his world fell apart. "It's been a real drastic, experience that I wouldn't wish on anybody at all. I never dreamed i'd end up putting both my kids down at one time," said Ballou.

A sheriff's deputy met him and told him there had been a fire and that his 25-year-old daughter, Misty, was inside at the time. Then he showed Ballou a photo to see if he could identify another victim, a woman about the same age. "I knew whenever he showed me the picture that it was both of them that I was going to have to deal with," said Ballou.

He realized his other daughter, his oldest, 28-year-old Cassandra was also dead. He says one a matter of seconds he lost both his children, his only children, in a fire that has yet to be explained." I can't say that I felt angry just feel like sad and hurt," said Ballou.

Losing a loved one is never easy, but to ballou, the death of both his daughters is unbearable.