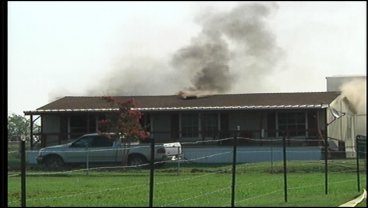 GRAYSON COUNTY, TX -- New details continue to emerge in a developing story out of Grayson County. We now know the identities of three people found inside a burning trailer, and as Deeda Payton reports authorities are now investigating the case as homicide/arson.

What started out as a suspicious house fire in Grayson County Monday morning is now a triple-homicide and arson investigation. "Due to the extensive damage on the inside of the home not the outside of the home that's what led us to believe in the possibility of arson and a fire being set on the inside," said Sgt. Rickey Wheeler of the Grayson County Sheriff's Office.

Sheriff's deputies say it doesn't appear the fire was set by any of the victims. "Considering that we are investigating this as a homicide, at this point, yes we are looking for a suspect or suspects," said Wheeler.

Just one day later it's a very different scene off Reynolds Lane. The medical examiner has taken the three bodies in to see their cause of death, the ATF has wrapped up their fire investigation and sheriff's deputies are meeting to try to put all of those pieces together to try to figure out what happened. When the fire started and if those deaths happened before or after the fire.

There were witnesses to the mobile home fire, but sheriff's deputies say even they couldn't tell if the people they saw inside the burning home were alive at the time. "Initial people that were there, three citizens that happened to see the smoke. They pulled up they were able to open the front door. They could see someone inside the home and attempted to get inside and get that person out, but just due to the heat they had to back out," said Wheeler.

Firefighters carried the bodies outside while they battled the blaze, but it was hours before crews could get inside to look around for clues, possible evidence of what transpired Sunday night or even Monday morning when the 911 call reporting the house fire came in.

Even after a search inside, authorities are still looking for answers about what happened to Brian Ritchie and Misty and Cassandra Ballou.