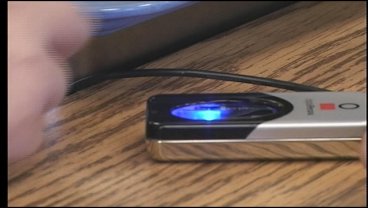 ARDMORE, OK-- Another Texoma school has gone high-tech in the lunch line. While other schools in Texoma have already started this program, it's brand new for a group of kids Ardmore. Meredith Saldana had to go see for herself, she has more on this story.

Students at Charles Evans Elementary say they're excited to be the pilot school, testing out the new technology for the district.

Charles Evans says so-long to the days of waiting in line at lunch, as students dig to find the lunch money mom or dad gave them that morning and hello to a new finger image scanning system.

Assistant Principal Jake Falvey says, "When you have an 8 and 9 year old, giving them $20, you're a lot more comfortable the way this process is going. It just makes a lot more sense."

The first day of school more than 600 kiddo's tiny index fingers were scanned into the system.

Madison Miller, a second grader, says, "I thought like, what? What are we doing here?"

Now, all the kids have to do is get in line, grab their lunch and put their finger on the scanner, then find a seat and eat.

The kids aren't the only one's who like it.

The school says parents think it's more convenient, too.

"Parents have an account," says Falvey. "They put money in that account and then they'll be notified when the kids reach a certain point. They'll contact that parent and say, you have to put a deposit in your account. It's much more manageable."

They've only found one small issue, if a child has ink on their finger or their hands aren't clean, sometimes the system can't read their print.

But the school has put hand sanitizer at the entrances to cafeteria.

"Sometimes the little first graders have to wash their hands before we do the finger imaging," says Falvey. "Whether they're working on something for class, so we found that out quickly."

The school actually scanned both index fingers of the kids just in case they come to school with a band aid covering one of their fingers, they can always use the other one.