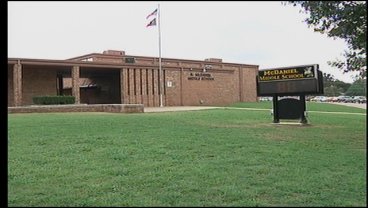 DENISON, TX -- A sad story in Denison, where a 7th grade student at B. McDaniel Middle School has died.  Tuesday, the school brought in extra grief counselors to help the students get through this horrible tragedy.  KTEN's Chris Severy reports.

School officials got word late Monday that the student passed away at his house.  Denison Police say it appears he took his own life.  While we don't normally report on these kinds of things, there has been a tremendous outpouring of support from the community.  The student was on the 7th grade football team and according to Principal Alvis Dunlap he was a model student and was well liked.  "It's very tough on all of us, but we are a family here and when something happens it affects all of us.  But we rally together, we'll work through this and life will move on.  But we all hope we will learn something from this tragedy," said Dunlap.  Principal Dunlap said the 7th grade football team has a game Tuesday night in McKinney.  He met with the team early Tuesday morning and they all decided that they will play the game in their former teammate's honor.