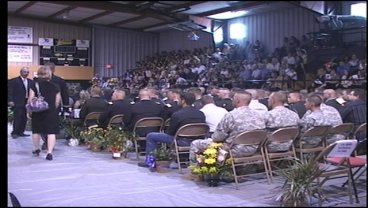 WILSON, OK- - Family and friends gathered in Carter County Friday to say goodbye to a much loved local police officer and national guard soldier. Elzie Cain, 25, was laid to rest Friday afternoon. He died last weekend, in Arkansas, after a fight at a little rock night club. He was there for guard training. Meredith Saldana has more on this story.

But Friday afternoon, those cheers were replaced with tears.

It seemed the entire town of Wilson, Oklahoma was there to say goodbye to one of their own.

Joe: "It's hard to describe how when you lose a fellow officer, a fellow brother."

The service started with The National Guard promoting Cain to Sergeant.

A touching moment for those in attendance.

Several people spoke about Cain during the service.

A former coach talked about his dedication and hard work, not only on the court, but in his life as well.

"But with Elzie, all you had to say was, 'Elzie I don't think you can do that' and that's all you had to tell him and it didn't matter what it was, he was going to get it done," said his former coach.

A man they described as having an infectious smile and who could light up any room he walked into.

It was, of course, a sad occasion but not without its lighthearted moments.

His high school coach said, "And then there was his inability, I guess, to walk by a mirror without stopping and checking himself out."

Patriot guard members and fellow law enforcement officers said it was their honor to attend the ceremony in remembrance of Cain.

"It means everything. Like I said, we cannot do enough for them," said Patriot Guard member David Engelhardt. "These young men put their lives on the line for us everyday and it is a small thing that we do here to honor him."

The ceremony ended, with a plea to remember the happy times in Elzie Cain's life.