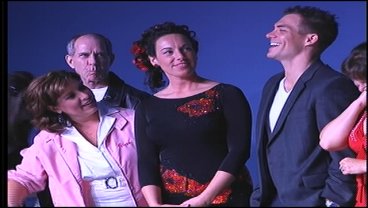 DURANT, OK--Dancing With The Stars was held at Choctaw Casino's Center Stage Saturday, and many got to meet celebrities in person--almost. Among the several dance contestants were KTEN's Lisanne Anderson and ABC Texoma's Sterling Riggs.

The show was sold out, and all proceeds benefited the Durant Main Street Program.

Their dance instructors say their weeks of practicing were long.

"She always shows up late, she's always in a hurry--she never can get the dance down right," Ron Alexander said, Lisanne's dance instructor.

It's debated whether it was Ron or Lisanne was doing the teaching.

"Maybe if I would have done this or something (bites rose with mouth) I don't know," Anderson said.

Sterling? don't let his good figure fool you. His salsa instructor says he had trouble keeping up.

"He's really out of shape," Amy West said, Sterling's dance instructor. "He can only dance like one or two . . . One or two times to do the dance and he's out of breath and he needs to rest."

Sterling's grateful though to have such a skilled teacher.

"I wouldn't say I could dance salsa," Riggs said. "I know a couple of steps. Without Amy West I'm in deep trouble. Bad trouble."

West said sterling wasn't exactly on time to practice either.

"No way I could salsa on my own," Riggs said. "Well I don't know if I had a good partner--yea sure I could salsa.

During their performance, one of the judges asked sterling his tastes in women. To West, it is still a mystery.

At least to the judges, his moves were suave.

"The one move I can take away from this experience is the swivel--swivel hips--swiveling my hips," Riggs said. "That's the basis. That's where it starts out at."

Though Lisanne and Sterling didn't win, the turnout was a success, and a Durant Main Street spokesperson said tickets were sold out.

"I think that this has set a standard that will be continued for years and I think that everyone has had a great time tonight," Anderson said.

Those who raised the  most money and took home the trophy were David Keese and J. J. Castro. Tod Harrison and Jenny Wills won the most votes for outstanding dance. 300 tickets were sold.