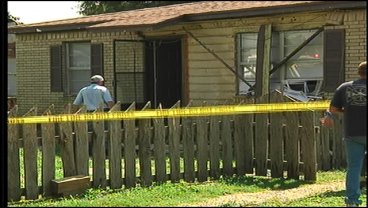 CALERA, OK--A natural gas leak that caused a blast that could be heard and felt for blocks. Deeda Payton was there just minutes after it happened. She joins us now live from Calera Oklahoma with the latest.

Firefighters say the house is a total loss. Although since it never actually caught fire, there is no smoke damage to the homeowners possessions.

Officials say the house exploded around noon. An officer heard the blast and then saw smoke coming from the home while he was on patrol. He says he could see insulation coming out of the roof.

Firefighters say the power of blast, blew the roof of the home, and knocked sheet rock out of the ceiling. Every home within a one block radius was evacuated.

"I was already in the house when they came and told me we needed to leave that there had been a window blown out. Gas explosion- so we just sat here and waited on them, we were a block away," Thomas Lee Jones said, neighbor.

"I heard my son called me and said there was an explosion and told me where it was at, so I came down here to see what happened," Larry Scoggins said, neighbor.

Fortunately no one was home at the time...firefighters say they did rescue a small dog and a turtle who were inside.

The home is a total loss.