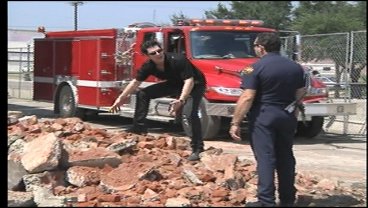 DENISON, TX -- A movie shoot is taking place in downtown Denison. It's an independent film taking advantage of tax incentives put in place by Governor Rick Perry. Deeda Payton was on set and even appeared in some scenes in the movie.

The entertainment industry has brought more than $1.2 billion to the state of Texas in the past ten years, and with all the cast and crew of this movie eating and staying in Denison for the duration of the shoot you can bet on a big boost for the local economy.

Historic downtown Denison is getting it's 15 minutes of fame thanks to Denison native and Hollywood director, Brett Donowho. "I went before the mayor and the city council last week of Denison and got a resounding vote of confidence and a yes from the city council and they said yeah let's help the good ole boy he's back home and so here they are and so without their help we couldn't get the shot and I think that and everyone's being so nice," said Donowho.

Since the director is a Texan himself, he says it was just a treat getting work here and to hire so many local people. He's using Denison ambulances and firetrucks. You name it, they're all from Denison, TX. "I mean look at this set guys, you've been watching it all day on the b-roll. This would cost $100,000 in Hollywood so without all the support of my friends and family this film wouldn't be possible," said Donowho.

And, the governor's tax incentives don't hurt. Donowho says he is actually part of the committee in support of bringing more filmmakers to Texas.

Part of the incentive is that movie makers spend at least $250,000 in the state and hire local people as cast and crew. Donowho even asked me to be in the movie playing what else a news reporter in front of the old Katy Building which collapsed earlier this summer. "She's the star of the film you gota come see it!" said Donowho. All joking aside, it's a serious movie, a thriller called "5 Souls" and you can bet it'll have plenty of soul from Donowho's hometown.