Mother of Teen Who Was Hospitalized After Smoking K2 Speaks Out - KTEN.com - Texoma news, weather and sports

Mother of Teen Who Was Hospitalized After Smoking K2 Speaks Out 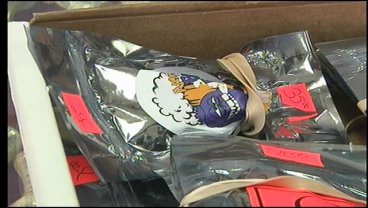 It's bad and now it's banned in Madill, Oklahoma, we're talking about K2. Meredith Saldana met with a woman who almost lost her son to K2 last month. She has more on this story.

The mother of the teen asked that we not show her face on camera, but did want to share her terrifying story with other parents.

"We were fortunate. They said probably 10 more minutes and the boys, all the boys, would've been dead," says Lynn.

She tells KTEN, her son and his friends are good kids, but they were tempted by the controversial craze of K2.

It's being called a synthetic form of marijuana and it's still legal in many Texoma towns.

"Their first day of school they were going down to Sherman to get school supplies and go hang out at the mall for a little bit and there was a convenience store, right there, easily available and they decided to try it. And they took two hits off of this and that was all it took."

Moments later, the side effects kicked in.

"He said that his brain immediately started to feel like mush. He started hallucinating, his chest started to hurt, everything went white. He laid his head up against the window. At one point he didn't know if he was dead or alive," says Lynn. "And he just started to pray to god."

The teens didn't want to call 9-1-1 for fear of getting in trouble, so they called Lynn instead.

"He couldn't even talk. He was not the one that called me. His friend called me and his friend could barely speak and he said please help us. The words K2 came out and he said Dillard's parking lot and hung up the phone."

That's when she called 9-1-1, when paramedics arrived her son's heart beat was more than double the average rate.

Lynn rushed to be at his side.

"You never want to go into a hospital and see your child hooked up to machines. Any parent that says my child is not gonna try this, they need to talk to their children because I was one of those parents."