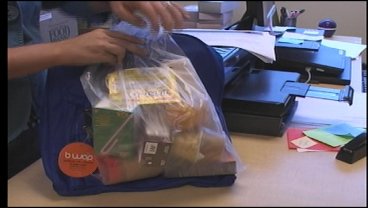 Nearly one in five children in Oklahoma struggle with hunger, and while meals given at school help curb some of the hunger pains for those kids, many of the children return home after school and especially on the weekends to very little food. The Regional Food Bank of Oklahoma's "Food for Kids" program is aimed at changing those statistics. "It gives them more confidence, it gives them a chance to excel in the classroom," said Cindy Sperry, a school-based social worker.

On Fridays, during the school year, those children are sent home with "hope in a backpack," which are backpacks full of food. "It's kid friendly snacks, and they get things such as white milk, chocolate milk, cereal, peanut butter and crackers. It's everything that they can prepare themselves without it having to be heated," said Sperry.

Local pastor Larry Murray works with the Regional Food Bank and says donations are a must to ensure that the children have extra food to tie them over on the weekends. "They are a nonprofit organization that depends almost entirely upon someone donating somewhere," said Murray.  He says every dollar helps, and it only costs two-hundred dollars to supply a backpack of food for one child every weekend throughout the entire school year.

During the month of September, those donations will be matched dollar for dollar, up to over one-hundred thousand dollars. "That would be it, that would simply be it and it would take care a child's food throughout the weekend for an entire year, and I know the child would appreciate it," said Murray.

"I think the biggest benefit has been when the children leave here on Fridays, they know that they have something to depend on Friday night, Saturday and Sunday," Sperry said.

To donate, go to http://www.regionalfoodbank.org/Faces-of-Hunger/Children