Radio Shack in Sherman is Held Up at Gunpoint - KTEN.com - Texoma news, weather and sports

Radio Shack in Sherman is Held Up at Gunpoint 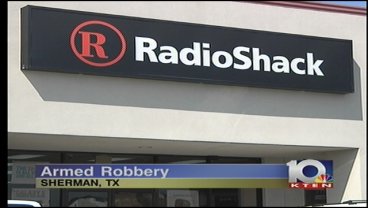 SHERMAN, TX -- Police say a man wearing a ski mask and pointing a handgun rushed into the Radio Shack off highway 82 in Sherman just as employees were closing up Tuesday night. The suspect remains on the loose.

Police got a 911 call just before nine o'clock last night alerting them that the Radio Shack just off the highway 82 and 75 intersection was held up at gunpoint.

Employees gave police a very vague description of the robber. He is described as either white or Hispanic who was last seen wearing green pants and a green shirt and wearing a black ski mask.

He fled before police arrived. "We haven't had an increase in robberies, it's just that they're such rare occurrences and they're such a traumatic or dramatic event someone comes in brandishes a weapon and steals money at gunpoint. It tends to catch the public's attention," said Sgt. Bruce Dawsey of the Sherman Police Department.

The Radio Shack that was robbed is located just across the Walmart parking lot which is a very well lit area since that Walmart is open 24 hours a day which residents say is a shock in its self.

If you have any information about the crime you are asked to call Sherman Police at 903-892-7290.