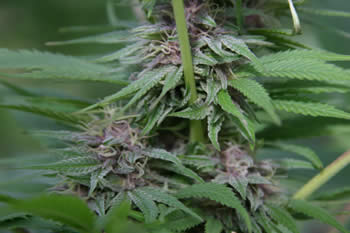 The plants were discovered when narcotics investigators flew over the suspected grow site.  Once over the area, the investigators noticed about 100 empty holes that had been dug.  Upon closer inspection of the area investigators located several locations that had the marijuana plants growing.

Most of the 100 plants were approximately 6 feet tall and well cared for.  There was an elaborate irrigation system set up to maintain a constant water flow to the plants as needed. The plants were well concealed by using rugged terrain and the surrounding undergrowth and trees in the area. The investigators located and traced the water source back to a home where they found grow lights, fertilizer, more of the same watering system components, potting soil, more marijuana plants and material on how to grow marijuana.

We are seeing an increasingly large number of sophisticated marijuana grows across north Texas this year.  This is largely in part to Cartel's moving into North Texas for the purpose of growing marijuana for profit.  In this particular case, Investigators believe that this marijuana grow is not related to the Cartels. Investigators do have a suspect(s) that are believe to be involved and will be questioned at a later date.