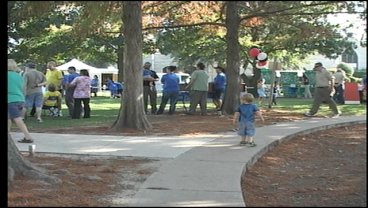 ARDMORE,OK--The United Way of Southern Oklahoma held their annual kick-off fundraiser Tuesday, but this year they took it outside.

Some of the United Way's thirty-three agencies set up booths in Ardmore's Central Park to help raise money for worthy causes around the community.

The agencies sold hot dogs, did face painting, and had drawings for prizes.

United Way Executive Director Tobi Ervin says this is the first year the United Way has done a kickoff outside, in the community.

"This time because we knew the economy was a little bit tight still for folks," said Ervin, "we said why not just invite everybody, let everybody come to the park, learn about what our agencies do have some fun, have some activities for the kids, get something good to eat, and just enjoy themselves and learn all about what united way is,"

"It means a lot just to come out here and participate with the rest of the agencies and to meet all the people and it means a lot to raise funds for the united way," said Wadonna Bells, from the Broadway House.

We sure wish all the United Way agencies good luck in their fundraising efforts.