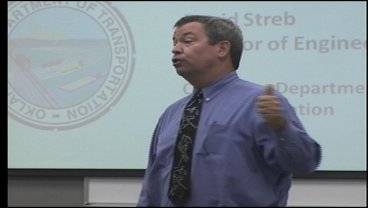 ARDMORE,OK--When it come to safety on the roads--and even road improvements, the Oklahoma Department of Transportation is looking for your input.

On Tuesday, the Ardmore Chamber of Commerce hosted a luncheon with ODOT talking about three major issues including bridge repair, rural highways with no paved shoulder, and cable barriers for divided highways.

As for I-35, ODOT's Director of Engineering David Streb says he is confident that progress is being made.

"We're optimistic that I-35 is going to be in a lot better shape and hopefully we won't have to go back after it for another twenty years, but we're pleased, we're glad, we're able to get after it a little bit." he said.

"The limited funding we've had over the years is still, even with the amount of funding that we get, highway construction is very expensive," said Division Seven Engineer Jeff Hiller, "so getting the money to stretch and getting all the projects that people want is difficult."

ODOT uses forums such as these to help better educate and serve the public.