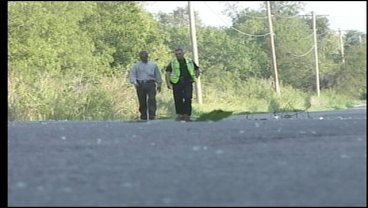 ARDMORE, OK- - A car accident took the life of an Ardmore High School senior, Tuesday morning. Meredith Saldana has more on this story.

Police say 17-year old Alyssa Porter was southbound on Mt. Washington, on her way to school, when something distracted her.

Porter drove off the road, overcorrected and then crossed into the northbound side and was hit by another vehicle on her passenger side door.

Porter was wearing her seatbelt, but was pronounced dead a short time later at the hospital.

The driver of the other car, Steven Dennis of Ardmore, suffered non-life threatening injuries.

As soon as Ardmore Schools learned of the accident, they immediately called in counselors to help  students and staff cope with the  loss.

It's such a sad situation and grief counselors say it's crucial to focus on those affected by the tragic loss.

She was a member of the flag core and had already captured the hearts of those who knew her.

"She had become very beloved in a very short time," says Upshaw.

Tuesday morning, counselors from across the area were called in to help students and teachers deal with the tragic and sudden loss of one of their own.

The C/Sara Foundation in Ardmore specializes in helping children cope with crisis, it was founded nearly 20-years ago.

Co-founder Donnell Cox was at the high school Tuesday morning to help as well.

"I'm just overwhelmed at the ability to respond to these types of crisis. Their level of preparedness is just incredible," says Upshaw. "Mr. Cox has been essential to helping us work through this situation this morning."

Cox says generally in a trauma situation like this about 25% of the teens will have an immediate reaction, while the other 75% are more likely to grieve in the days to come.

Cox says keeping the communication doors open for your teen will be the key to helping them through this tragedy.

"I encourage parents to simply ask the kids you know, how are you feeling, what's going on, what can I do to help, we're here for you," says Cox. "Just that supportive kind of talk, and they may turn you down for 2 or 3 days. It may be next week, maybe next month from now but keep it open. Keep the invitation open to them and they'll take you up on it."

For now, the high school says they're reaching out to Alyssa Porter's family.

"Right now, the family is our highest priority," says Upshaw.

"Trying to bring them comfort and try to support them through this very, very difficult time."

Although your teen may not have known Porter well, counselors say it's still important for them to grieve.