Stalking Protocol To be Implemented in Bryan County 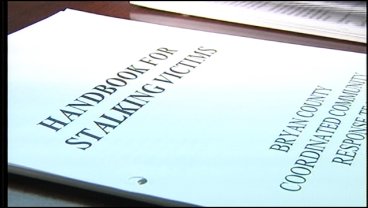 DURANT, OK -- Officials in Bryan County are watching out for your safety. They've developed a new protocol for handling stalking cases, the first of it's kind in Oklahoma and it's catching on. Deeda Payton reports.

Local law enforcement says stalking is one of the most underreported crimes and it is often misclassification, so they wanted to compile a set of guidelines to help authorities respond to harassment claims with more power and a greater understanding of what constitutes stalking.

The new guidelines were written by officials at the Durant and Calera Police Departments along with advocates at the local crisis center and include sections for all the different branches of law enforcement and victims as well.

Police say the new protocol will help investigators see the big picture of what is really going on and will help determine if a series of crimes is really a stalking case. "Where they may not think anything about the text messages or phone calls other than just being annoying whenever you wrap it in their tires slashed the next day they keep driving by the house, whenever you take all the circumstances together. It may fall into an additional charge of stalking," said Lt. Carrie Wyrick of the Durant Police Department.

Police and advocates hope the protocol they presented at a conference on domestic violence in Norman will help save lives and put more legal pressure on stalkers.

Durant police say several departments across the state of Oklahoma have expressed interest in their protocol and plan to implement it in their areas.