Sewage Washes Up in Neighborhood Creek, City Workers Clean Up 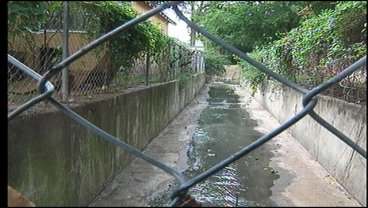 SHERMAN, TX--The Sherman residents on the 100 block of North Cleveland Avenue say that their back yards smell like a toilet.

"There is feces down there," Martha Cox said, Sherman resident.

Poop--Martha Cox said--has made the creek in her back yard smell unbearable.

"One of the main sewer lines is clogged, and it keeps backing up into this run off creek over here, which is strictly for storm drains, but the sewage is backing up in it, and I mean raw sewage," Cox said.

The overwhelming smell in the creek may have actually been due to an engineering mishap 80 years ago when homes were built on top of a clay sewer pipe.

Public Works Director Don Keen said that the homes probably shouldn't have been put there in the first place. He said there is only one solution without bulldozing the property.

"Have a new line without having to go in and dig things up--and that being under people's houses--that wasn't an option," Keen said.

Until the problem is fixed, one neighbor says he's reluctant to let his three year old son play in the back yard.

I've seen like old toilet tissue, douche bottles, trash, you know turtles and stuff in there and all other kinds of sewage that runs through here," Larry Mayberry said, Sherman resident.

"I can't let my grandchildren out here to play because I don't know what's in that creek and you can't stand the smell," Cox said.

Fortunately Sherman city workers picked up the mess Monday morning. They expect the new liner to be installed within a week.

Cleaning up this stinky mess starts by opening a fire hydrant up and letting the water run all the way down to the creek. The water ends up at the Cherry Street Park in a creek that's just down the street from Cox's home.

I want this neighborhood to be safe," Cox said. "I want to be able to get up and take my kids to school in the morning without gagging.

When the problem is fixed, hopefully a day in the back yard will smell a little more pleasant.

A company has been hired to install the fiberglass liner. The project should start within a week.

Sherman city workers are cleaning the mess by hand. Due to regulations set by the Texas Commission on Environmental Quality, chemicals will not be used in the water.