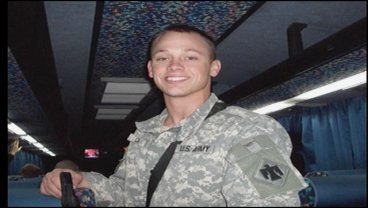 ARDMORE,OK--More on the story we brought you Sunday night an Ardmore police officer who died in a weekend fight in Little Rock, Arkansas.

It happened at a bar early Sunday morning.

Twenty-five year old Elzie Cain was also a member of the National Guard.

He was in Arkansas for sniper training.

Friends say after completing his training he went out with some friends to a Little Rock night club.

Little Rock Police Lt. Terry Hastings tells us that around four a.m. Cain was involved in a fight with twenty-six-year old Aaron Threlkeld.

Threlkheld punched Cain in the nose and Cain fell backwards, hitting his head on the dance floor.

When police arrived, Cain was unresponsive.

He died Sunday afternoon from his injuries.

Threlkeld was arrested for first degree battery and posted a $10,000 bond, Sunday.

He's set to reappear in a Little Rock court on September 17th.

Meredith Saldana has more on who Elzie Cain was and where he was from.

Those who know Elzie Cain tell us he loved serving others and his death came as a shock to his small hometown of Wilson, Oklahoma..

Twenty-five year old Elzie Cain was an Ardmore Police Officer and a member of the National Guard.

Sunday afternoon, he died from head injuries after an early morning bar fight in Arkansas.

His death has left his home town of Wilson shocked.

"It's just so random, it's so unexpected. He was young, vibrant, I mean a new father. I was in shock when I heard." Herald said

She says he was a great student and athlete and that he loved life--and especially loved his family.

She tells KTEN she has many fond memories of Officer Cain.

"I remember on more than one occasion he would come to school straight from the deer woods still dressed in his camouflage," she said, "and he would, you know, come into class wearing his muddy boots and sit down and ready to do some algebra."

Herald says Cain was a leader and she knew he had a bright future ahead of him.

She says Cain could be seen out in the community coaching t-ball or spending time with his family--something that the community of Wilson, Oklahoma will deeply miss.

"We just expected him to be around, you know. He's one of the people you expected to see at the football games on Friday night or to come watch basketball games. It's hard to imagine him not being here anymore."

Our thoughts and prayers go out to the Cain family.