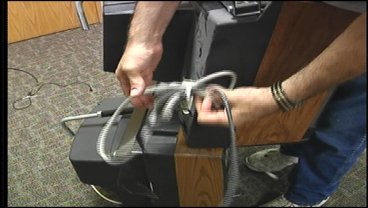 DENISON, TX--It was a garage sale that gave better deals than black Friday. Televisions could be bought with pocket change.

"Prices went down yesterday," Jeremy Auldridge said, shopper. "Last night they cut them in half. Today they were almost giving things away. We got TVs for $1 some for 50 cents."

A public sale was held at the old Texoma Medical Center in Denison to get rid of many items including chairs, cabinets and television sets. An employee says people have rushed for deals all weekend.

For this man, the old hospital is more than just a bargain.

"Myself, was born here, my brother, I have cousins," Auldridge said. "I'm from a large family and we have a whole bunch of people that were born here. My grandfather passed away here. I mean it was life and death all came from here and so it means a lot to our family."

"And I thought I would look for a television and a couple of chairs for my mom because she has a hard time getting up and down out of chairs," Jo Owens said.

The sale was officially over Sunday afternoon at 3:30. Until then, workers were just trying to stay cool.

"Actually I have two fans," Luper said." I have this one here and I have another one in a hallway--those are not for sale because I'm trying to keep cool up here on the second floor so I'm keeping them."

As soon as he turned around, a fan was sold.

"If I had a truck, I'd probably grab a refrigerator but I don't," Owens said.

Plenty of shoppers left with bargains as well as a piece of Denison's history.

Profits from the sale go to the Texoma Medical Center, but they won't be making any money. The Centurion Service Group put everything in the building on liquidation. The sale was held to simply offset of what it would have cost to throw everything away.