Texomans Honor Servicemen and Women and Those Lost in 9/11 - KTEN.com - Texoma news, weather and sports

Texomans Honor Servicemen and Women and Those Lost in 9/11 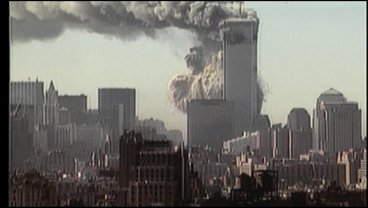 TEXOMA--The image still burns in the memory of many Americans. Just before 8:45 AM eastern time, a plane crashed into the north World Trade Center Tower.

"Things changed," Jesse Kelly said, of the Sherman Fire Department. "Our outlook on life, our outlook on the world, where we fit and what was going on around us--it all changed that day. Because we know that we had a sense of vulnerability and that we had to be alert and on guard at all times from that day forward."

The shock could be felt in living rooms all over the country.

"We just kept saying surely not, surely not, but when we actually saw this on the TV and it was a bad day for everyone," Wyota Hannan said, Colbert Historical Society charter member.

In Oklahoma, the Woodmen of the World saluted America's servicemen and women.

For this 9/11 anniversary, the Colbert Historical Society was given a new flag pole.

"Look at the Americans that died in September 11 and I don't think America should forget this," N.G. Austin said, Veteran.

2,977 lives were lost underneath the rubble. At the time, Vietnam Veteran Larry Marlow was watching TV.

"I thought it was a movie at first, but as it went on--you know--news broke in that it had happened," Larry Marlow said, Veteran.

The horrific images on screens in 2001 reminds many Americans how vital first responders and servicemen and women are.

"They have been the ones who have given us our freedom, and then we feel that our freedom was invaded--very much so," Hannan said.

"A lot of our guys didn't come home," Marlow said. "We do this to honor them."

When saluting the flag, many citizens also remember the tragedy that shook the nation.