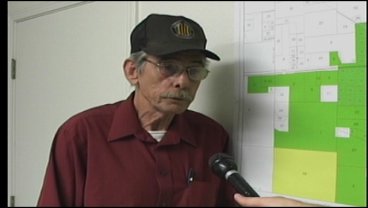 OAKLAND,OK--Officials in Oakland,OK say Madill officials are disrespecting their town and its residents.

The controversy started when Madill annexed land near Carilyn Street and City Lake Road to build a water tower.

Oakland city officials, which is the town that sits on that plot of land, say Madill annexed the land illegally.

They say Madill didn't issue an ordinance and they argue Madill does not own three territories adjacent to the property, which would violate state law.

"Right's right, wrong's wrong. If there going to try to do something, will work with anyone," said Mayor Moss, "We'll try to work with Madill, but let's do this thing right, and quit running roughshot over everybody like the municipal governing body of Madill has done for many, many years."

Oakland officials say they do want to work with Madill to resolve the situation. Madill officials were unavailable for comment.