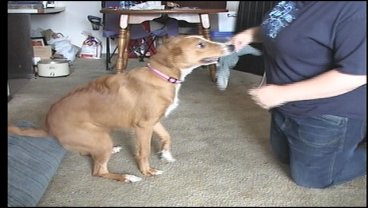 ADA,OK--A college student in Ada faces eviction from her apartment--all because of her service dog.

Her service dog Angel helps warn her when a seizure is coming.

Sheena says her property manager at Tanglewood Apartments originally would not allow the dog on the property.

That's when Sheena filed a complaint with the Oklahoma Human Rights Commission.

The property manager then allowed her to keep the dog, so Sheena dropped the complaint.

But last Tuesday, the Stallings received a notice of eviction saying they had ten days to remove the dog or move out.

Sheena says she does not understand why this is happening.

"I can be home by myself or with one person and not be scared of dying like my cousin did," Sheena said. "She had a seizure in the bathtub and drowned. That's why I have her (Angel). That's why I need her."

Tanglewood's property manager would not comment to us, but referred us to her lawyer.

Her lawyer released a statement saying in part: "We simply ask that the tenant provide appropriate documentation to support the waver request which they were provided with today.

They said the Oklahoma Human Rights Commission dismissed Sheena's claims and they say Tanglewood Apartments is committed to providing access to people with all disabilities.