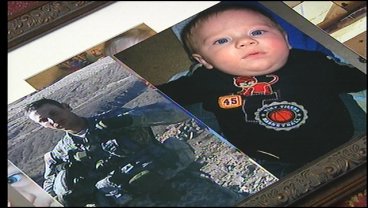 SHERMAN, TX--A soldier from Iraq is returning to his family this weekend, but instead of a happy reunion, he's facing what may be the most difficult time in his life. His one year old son Gabe may not live.

"We're praying that he holds on until Sam gets home form Iraq, but we know he's on a plane," Rebecca Goshorn said, Samuel's sister. "So, we have faith that he'll make it."

Samuel Goshorn was able to see his son Gabe be born in May 2009 before he left for Iraq that December. Now he's flying to the Children's Hospital in Dallas to see his baby on life support.

"They said he was brain dead and he wasn't going to wake up, and they were just keeping his body alive till Sam gets home," Goshorn said.

Sherman police say the case is still under investigation, but Micah Duncan now sits in the Grayson County Jail, charged with injury to a child.

According to Goshorn's family, Duncan was the was the last person left alone with Gabe, while his mother Meagan Goshorn took another child to school.

"She said she was gone for about 15 minutes and whenever she came home the ambulance was there and he wasn't breathing," Rebecca Goshorn said.

Gabe was taken to Wilson N. Jones, then  flown to Dallas. According to Rebecca, Duncan said that Gabe fell from a high chair.

The one year old now suffers from a cracked skull and severe brain damage.

"We ran up to the hospital last night," Goshorn said. "We saw her [Meagan] and her family there. They're very torn up obviously about everything."

His family is now hoping for a miracle. Samuel is racing the clock, so he can see his little boy.

"He doesn't deserve it," Goshorn said. "It's a situation that doesn't make sense that never should've happened. Whatever he needs, he knows that we're here and--you know--whatever we can do."

The case is still under investigation. Samuel's family is waiting for him to arrive in Dallas before they take the baby off of life support.