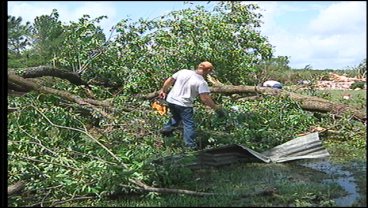 When you take a look around, it's not even possible to put into words the destruction out here.  This yard is scattered with tree limbs, twisted metal, a family's belongings.  It's hard to believe that people were inside when the storm hit, and looking at this damage, even harder to believe they made it out safely.  This is not how Stephen Onstott wanted to be spending his Thursday, taking the chainsaw to the dozens of tree limbs and uprooted trees dotting his grandmother's property.  Onstott said, "Right now of course we're just trying to get some of this stuff cleaned up.  I mean you can wait for somebody else to do it, but it kind of takes your mind off what's going on."  Stephen saw the tornado coming and ran for cover in the bathroom, wedged himself between the toilet and sink as the twister ripped the roof clean off.  He said, "I got out and I didn't really know what was going on.  I thought it was just a nightmare.  I came over and stood on my kitchen table and looked above the house and ran back here to my grandma's house.  She was OK.  She was standing in the kitchen cooking.  Just across Hwy 69/75, it's the same at Pete Covey's house.  He's lived here for more than 40-years.  He was laying on this bed when the storm hit.  Above him the roof came off, with this 2X4 aimed directly at him.  Covey said, "Well, I was laying on the bed getting ready to take a shower and I heard something that sounded like something I never heard before."  He said now, he's just thankful to be alive.  Added Covey, "Well, God grant me the serenity to accept what's happening.  And then give me the courage to fix what I can."  The National Weather Service issued a preliminary report classifying the tornado as either an EF0 or EF1.