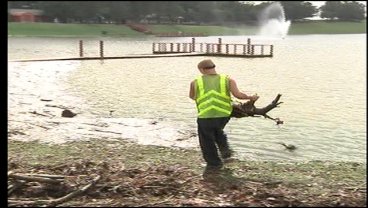 Heavy rain flooded Waterloo Lake Park in Denison. "It's just mother nature taking over when she wants to show her wrath, she can show her wrath," said Thomas Lietz of Denison Parks and Recreation.

Several local residents came out to the park to see the flooding and compare the water levels to what they experienced in their own front yard. "I got well over two inches of rain at my house and it came down so fast until it looked like a big gully coming through the street you know," said Jones.

Even a few fisherman and kayakers showed up at the lake to take advantage of the high water. "Well I knew the catfish would bite with the rain so I came back and tried to catch some fish," said Denison resident, Michael Cameron.

Fortunately, though, no major damage was done to the park. "It could be a little bit worse, but it's still bad it'll be alright. It'll take a couple days to cleanup once we get it cleaned up everything will be back to normal," said Lietz.

Crews with Denison Parks and Recreation say this isn't the first time Waterloo Lake has flooded the park and they don't expect it to be the last.