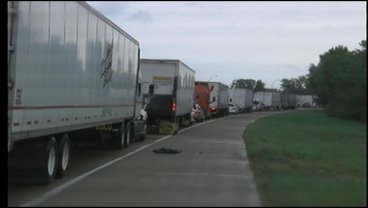 HIGHWAY 75-- A micro burst came through Colbert, Oklahoma thought brought down power lines across Highway 75, and the result was traffic that backed up for hours.

A line of semi-trucks, cars and motorcyclists, that started near Colbert and backed up all the way into Texas on Highway 75, was at a stand still from around 4 p.m. to 8 p.m. this evening.
The power lines that fell caused two minor accidents, and while we're told there were no serious injuries, it did cause a huge headache for drivers.

"It's just a big line of traffic and everyone started turning around, going back down the service road and headed back South," said Paul Peters, a resident of Coleman, Oklahoma.

"Since I've been out here, this is one of the worst traffic stops I've seen, and I'm from New York, so I'm pretty used to traffic, but this is really backed up for Texas," said another traffic victim, Derrick Wilson from Durant, Oklahoma.

The road is all clear now.