Couple Rescued from Flooding in Sherman 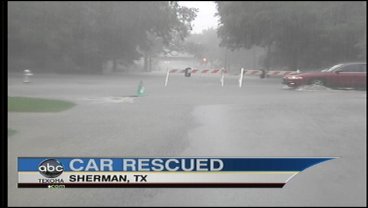 Water rose in all of the neighborhoods around Austin College. The intersection at Mulberry and Harrision was shutdown for most of the day because of the rushing water.

At around one Wednesday afternoon, a couple got stuck in the road while driving their car at that intersection. The fire department's swift water rescue team was able to get them out in time. The couple was not injured.

Moments later, cars struggled to make it through the high water just over the Grand St. bridge between the bridge and Texoma Parkway.