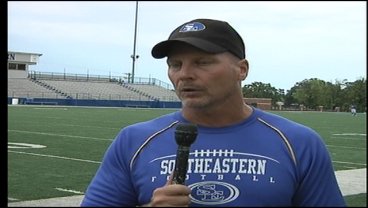 DURANT, OK -- The Savage Storm had a rough first week against Arkansas-based Henderson State. But Head Coach Ray Richards saw mistakes he calls correctable.
Southeastern had a bye last week, which has given them extra time to prepare for their next challenge, Incarnate Word, which is only a two-year old team.
Plus Coach Richards has a new quarterback and a pre-season offensive player of the year
So Coach Richard's strategy is to be prepared for anything and give it all they got.