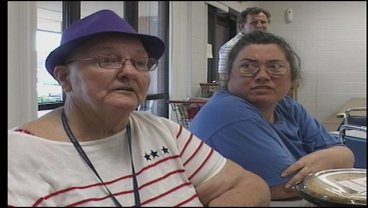 ARDMORE,OK--September is Hunger Action Month and, because of the sluggish economy, there are many more people in need of help these days.

We told you recently about the need for donations at a Sherman food bank.

The Salvation Army in Ardmore say they've also seen an increase in the need for food and the soup kitchen has seen more people come in for a hot meal.

But Major Jeff Daniel says donations have been able to keep up with the need.

"We were thankful that we've been able to have enough resources as far as food donations," said Major Daniel, "to be able to meet the need and we were blessed with a donation from Dot Foods and there help, so that's come in handy in meeting the increased need."

The Salvation Army's soup kitchen is also seeing increased need. Workers there say they served one hundred people at the end of August.

"So many that comes in here do not have a meal. If it wasn't for us cooking five days a week and the mission up there and stuff, there would be no food for them," said Sherrie "Nanny" Daily.

The Salvation Army says it is need of toiletry items like shaving cream, razors and combs.