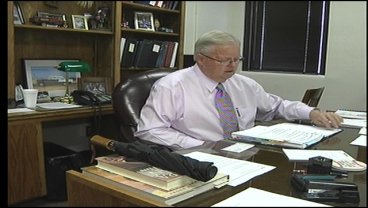 DENISON, TX -- Denison's City Manager of more than 23 years is stepping down. He's announcing his retirement to the City Council Tuesday night. Deeda Payton spoke to both the City Manager and the Mayor about the decision.

The mayor says he will recommend to the council that they hire a search firm to help them choose the right person for the job, but he says it won't be easy.

Denison has come a long way in the past two decades due in large part to long-time City Manager, Larry Cruise. But, at 70 years of age, he says it's time to step down. "Been here over 23 years and I'm not a spring chicken anymore and it's time for me and time for the city to move on," said Cruise.

Cruise is announcing his retirement. He says he plans to spend more time with his wife and five grandchildren, but admits it will be a big change. "What am I going to do with all my time. That's what Linda and I talk about. Where do we go now?" said Cruise.

Mayor Robert Brady says his departure come late February will be a big change for the city. "Someone that has been here 23 years and offered a lot of stability to the city and has done the kind of work that he's done. It's going to be a big hole to fill," said Brady.

City officials plan to start their search for the next city manager right away at the same time they will be welcoming in a new Main Street Director, Donna Dow, who has a strong reputation in Durant for building up the city's downtown area. "I'm looking forward to working with her," said Brady.

The mayor says Denison's Main Street has struggled these past few months, businesses have shutdown and for sale signs have gone up, but he believes Denison is in a good position for future growth. "I think the future is tied directly to the economy and the economy has got to improve," said Brady.