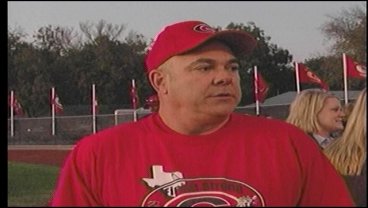 GAINESVILLE, TX -- We told you two weeks ago about a Gainesville man. A good Samaritan shot while trying to stop a robbery. Tonight, we know Wray Westbrook is recovering. But for the first time his family is speaking out about his courage. And now how the Gainesville Leapord football family is helping.
Gainesville, Texas. A small quiet town where on Friday nights football is the name of the game. But this week the town will come together for their first game on their new stadium, and to continue support for a fellow football fan who stood up for what was right.
Wray's wife and oldest son shared with us what happened that night. It all started with an early morning phone call that the front door of their business had been shot out. After boarding up the door Wray and Cindy went down the street to Valero for a cold drink. A young man ran out behind Wray with a stolen case of beer. Wray then chased the young man, and was shot at by the alleged robber fourteen times. Since the shooting the family has seen an outpouring of kindness from neighbors.
The youngest, Patrick, has turned to football as a way to help heal.
And even though Wray won't be at the game tonight, he will still be keeping up with his team, and the Gainesville Leopard football family will be giving back to the man who has given them so much
At the game tonight the Gainesville cheerleaders will be passing buckets to take up a collection to donate to the account set up to help the Westbrook family with travel and medical expenses.