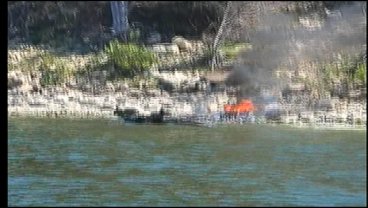 LAKE TEXOMA--Flames turned a 22-foot boat into nothing more than a pile of debris over the holiday weekend. No one was hurt, but the cause of the fire is still under investigation. Boat experts say to avoid the next outing from going up in smoke--it's important to look under the hood before taking off.

"Just jumping in it like their car--it starts every time without using the engine blowers," Scott Hayward said, Highport Marina Vice President of Operations. "They take the fumes out of the compartment."

Without air circulation, fumes could cause a spark to ignite, which could end in disaster.

"They're extremely flammable," Hayward said. "They're built out of probably 85 percent is petroleum based. Once they catch on fire, there's really nothing you can do. Get everyone to safety."

The US Army Corps of Engineers advises having enough life jackets in the vessel as well as an extinguisher. However, even a ten pound one only has about ten seconds of fire fighting capabilities.

"Mechanically, they just want to ensure that the motors are working properly," Billy Williams said, lead ranger US Army Corps of Engineers. "They can't always expect for the motor to be working if it's been in storage all summer. So, take the time to make sure that it's working properly."

"You really need to be somewhat savvy when it comes to boating," Hayward said.

You won't be finding ethanol in these pumps. Not only could the fuel pull in moisture but it could also be very damaging to your boat's engine. A faulty engine increases the chances for a fire hazard.

"You are an island in your boat and out in the water," Hayward said. "We want everyone to have a great time and come back safe and sound in this beautiful weather. It'd be perfect.

A perfect boat outing may have to start with checking your fluids.