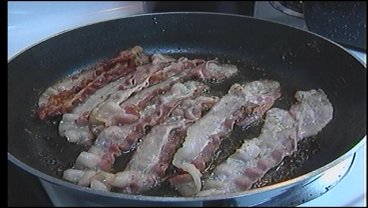 PRESTON, TX--For one local fire department, putting out the flames started with a few hundred eggs and sausage patties. The food wasn't wasted though. A group of fire department volunteers started cooking before dawn to support those who put out fires and save lives.

These ladies have been frying bacon and eggs since 5:00 this morning, but they're not feeding an army. They're feeding those who support their local firefighters.

"My husband and I moved up here in 1963 and we helped start the department, back with a bunch of wonderful people, so it's just a love," Sherron Wilson said, volunteer.

With all of the equipment needed to put out a fire--the pancakes and sausages on these plates are being sold to raise money for the department.

"Well the fire department is totally a non profit organization and we work everything off of fundraisers, grants and donations," Allen Vols said, Preston Fire Chief.

The Preston Fire Department has been protecting the peninsula since the 1970s. Now, they're hoping to build a new station within the next couple of years. It's not just the need for new facilities though. Frank Foster and his wife have been supporting the fire department for 22 years--they said--because their local fire fighters are heroes.

"They have responded immediately and we certainly appreciate it," Frank Foster said. "Her sister had a [seizure] once, and they were out there in 5 or 10 minutes."

"If you'd had as many operations as I had, they've always come out and picked me up and carried me everywhere," Jack Rawlins said.

Volunteers hoped to sell anywhere from 75 to 100 plates this year.

Last year we served 61 plates--we're hoping to top it every year we like to do a little more because it goes for the fireman's benefits--gloves, coats, everything," Wilson said.

The dedication of these volunteers is one fire that won't be put out any time soon.

The Preston Fire Chief says they hope to raise nearly$1,000 from the benefit.

Members of the department are also applying for FEMA and Homeland Security Grants to get closer to their goal of a new facility.