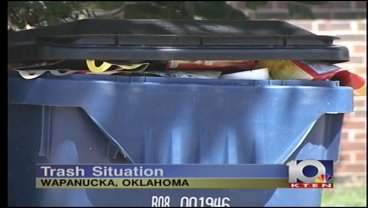 WAPANUCKA,OK--Some residents in Wapanucka, Oklahoma say they are fed up with the trash situation in their town.

Back in March, citizens had trouble getting their trashed picked up because the city did not pay its bill with Waste Connections, a trash collecting service.

Legal trouble ensued and eventually the city signed a contract with ATM Industries. ATM provides dumps called "Roll-Offs" at places around the town for citizens to dump their trash.

Still, residents say trash from the previous contract is still sitting in their trash cans.

The city says Waste Connections refuses to pick up that trash and says citizens can place that trash in the Roll-Off dumps.

Still, some citizens say the dumps are not properly maintained.

"Well, I pulled up there to get my trash dumped and the wind was blowing a little bit and there were thousands of maggots coming out of both sides of the dump, the Roll-Offs," said concerned resident Sharlee Rhea, "and I pulled up really quick cause I was afraid they'd get on me and, in order to get my trash in there, you have to throw it and I was afraid those maggots--there were thousands of them."