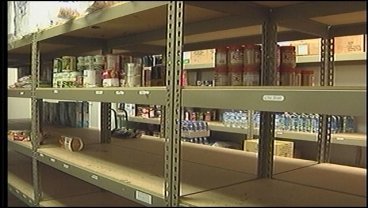 SHERMAN, TX  -- For thousands of Texoma residents, the Salvation Army Food Pantry is a lifesaver, but these days it's empty. Deeda Payton reports on how you can help.

The shelves are empty and the lines are long. The Salvation Army's Food Pantry in Sherman is struggling to feed the thousands that rely on it to feed their families. "It's very bare. We are low on funding to replenish through the North Texas Regional Food Bank. We're low on donations and a lot of the problem is that we've increased as far as request for food," said Social Worker, Donna Waters.

Last month alone, the pantry fed 1,100 people of those more than 300 were children, and Waters, says the need isn't showing any signs of slowing down anytime soon. "People often think that it's a place for people that aren't motivated to go to work that come here on a regular basis and what they're finding out is that even with a job it's hard to put food on the table," says Waters.

"There's a lot of different people that come here. Some that, like me, I work but it's really slow right now so I'm not making very much money, but I make too much to get on food stamps and there are people that are on food stamps and it just doesn't cover it," said Donna Waldroup who was brave to talk on camera. She admits if it wasn't for local food pantry's there are some months when she would go hungry.

"I think the surprise that I hear most often is when a client sits down and says I never thought I would be here." Waters says it's the worst it has ever been.

The Salvation Army encourages residents to go through their own pantry's and donate any canned goods or foods that would otherwise be thrown away or that would go unused.