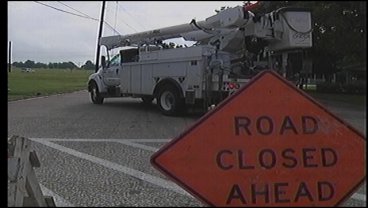 DENISON, TX -- A power outage caused by a trash truck that got caught in the high lines caused big problems for a Denison middle school Thursday.  B. Mcdaniel canceled classes and part of Crawford Street had to be shut down while crews repaired the damage. Deeda Payton explains what happened.

A city trash truck got tangled in the power lines around five o'clock this morning causing quite a bit of damage to the power poles and knocking out power to both B. Mac and Mayes Elementary. Power was restored to Mayes before school started, but it forced administrators to cancel school at B. Mac.

It was a hectic day at B. McDaniel middle school in Denison this morning, not because of students, but because of a power outage. "It's always an inconvenience when you get a call at 6:30 and you're told power is out at two school at that time B. Mac and Mayes," said Superintendent Dr. Henry Scott.

Scott says a city trash truck on it's morning pickup got caught in the high lines. The city says the lift arm which was holding a dumpster at the time jammed and when the driver pulled out they took a power pole and some lines down too. "It just wiped all the electricity out to the building," said Scott.

Dr. Scott says he had no choice but to cancel school for the day. "Parents have been very understanding and I think their main concern are the kids being taken care of. Number one, we're going to take care of the kids before we do anything else and if we make an error it's going to be on the side of safety," said Scott.

Since the school was without power, Dr. Scott says it wiped out their auto-call system to notify parents. Thanks to the media, by 9:15 all the kids that were at the school had made it home safe. Dr. Scott says that's what's important, no one was injured and the damage was repaired.

An Oncor spokesperson says power was restored to B. McDaniel around one o'clock in the afternoon. Dr. Scott says their will be school Friday.