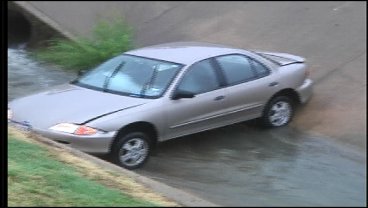 DENISON, TX-- Heavy rains poured down on Texoma today, causing a lot of problems around the area.

Around one o'clock this afternoon, while drivers were trying to navigate through the heavy rain showers, Brandon Mitchell was doing what he always does: working at the automotive department at Wal-Mart. That was until he looked up and saw a car stuck between Wal-Mart and Jalapeno Tree off Highway 120 in Denison, TX.

Police tell us a man was having trouble seeing the road and hydroplaned off the highway into a concrete culvert, then his door came open and all the water washed him out of the car.

Brandon Mitchell was watching the whole thing, and did the only thing he could think of: he jumped into the water and tried to pull the man out. "I was able to get over there, get him up out of the creek, and then he took off. He didn't know where he was, he was dazed and confused, and he threw a little bit of a tantrum with us, but we got him down, and laid him down out him on a stretcher and carried him up the hill," Mitchell told us.

The swift water team was put on stand-by, but between Brandon and the Denison Fire Department, the driver did make it out okay on his own. He was taken to Texoma Medical Center and released shortly after. Brandon actually recognized the driver as one of his usual customers, and he said he thought nothing of jumping in the freezing water and risking his life to save another's.